Kazan Soda Elektrik that is built with an investment budget of 1.5 billion USD opens officially on 15 January 2018 – Monday. Ciner Group announced the opening ceremony of this giant facility with a striking ad. The ad includes the following statement:

You need to dig as deep as 800m in that soil.
You need to find that rare ore found in your soil.
You need to surface that ore using a method named as an invention in the world and to take its patent.
You need to abstain from damaging the environment while using that technology.
You need to do this using just national resources, national intelligence, national knowledge and national materials.
You need to decide to invest 1.5 billion dollars without hesitation.
You need to transform that underground ore to "soda ash" that everyone searches for using this investment.
You need to bring 600 million dollars to your nation by exporting this "soda ash" used by thousand industries in the world.
It is not enough to love your stone, love your soil! You need to convert that soil into revenue for your nation,
For more employment, for more bread,
For Turkey.
Ciner Soda Ash Facility is now at work in Kahramankazan/Ankara with a capacity of 2.7 million tons per year." 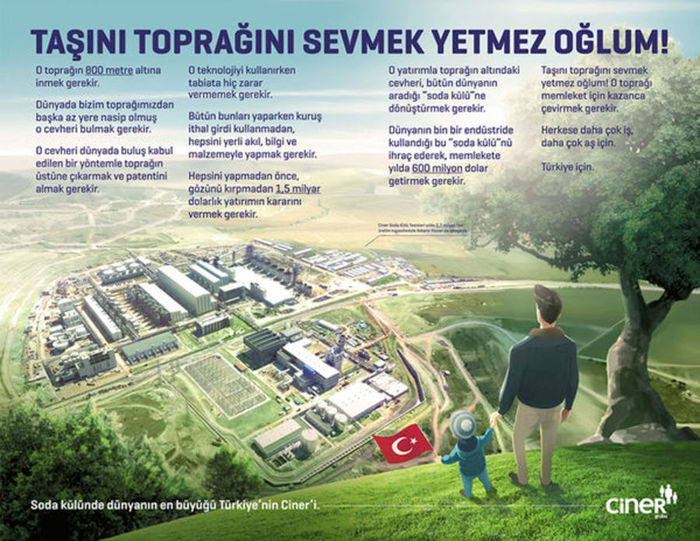 The opening ceremony of Kazan Soda Elektrik Üretim A.Ş. facility that raises Turkey to the world leadership position in this field with 1.5 billion dollar investment of Ciner Group will be held tomorrow and honoured by President Recep Tayyip Erdoğan. Berat Albayrak, Minister of Energy and Natural Resources will also attend the ceremony. Kazan Soda Elektrik Üretim A.Ş. to export all its products.

Kazan Soda will achieve a total employment figure of 2200 at this facility with a production capacity of 2.7 million tons. The largest solution mining/soda ash production site of the world with Turkey's largest capacity co-generation facilities enabling 380 MWe and 400ton steam production will export all its products. Kazan Soda Production Facility that will supply 14 percent of the total natural soda ash need of the world will also help meeting the current deficit of Turkey with its domestic and national production.

While soda ash is produced from fully-local mine resources, the entire production will be exported overseas. The volume of the export with 100 percent added value will reach 600 million dollars. Along with Eti Soda, another affiliate of Ciner Group, this export figure will increase up to 800 million dollars. This product is exported to Australia, Japan, South Korea, Pakistan, India, Spain, Belgium, Netherlands, United Kingdom, Italy, Germany, Norway, Finland, Sweden, Denmark, Greece, Yemen, United Arab Emirates, Israel, Egypt, Saudi Arabia, Morocco, Tunisia, Nigeria, South Africa, Algeria, Brazil, Canada, United States of America, Thailand, Malaysia, Indonesia, Philippines and various other countries, and will be one of "the most exported products from Turkey".

Ciner Group, whose investment in Turkey exceeded 3.5 billion dollars in the past five years, aims to contribute to the future of Turkey through economical, social and cultural improvement.

In addition to the fact that Kazan Soda and Eti Soda, another affiliate of Ciner Group within the same industry, produces the highest quality using the most environmentally-friendly technology compared to other soda ash producers, this product is also the purest of the world with a purity rate of 99.8%.

The overall annual production capacity of the affiliates under the Glass and Chemicals Division of Ciner Group, a global giant in industrial production, is 7 million tons of soda ash. With this figure, the company is the largest producer of the world. Given that, Ciner Group is the only globally leader industrial firm of Turkey with a fully-integrated industrial network for processing, producing and distributing mine efficiently. In this sense, Ciner Group that strategically partners with many global institutions and organizations raises its sights with Kazan Soda Production Facility that it recently commissioned and reinforces its position as the world leader in its field. The group companies that produce green certified soda ash stands out in the world with its environmentally-friendly approach, too.

Trona that is also known as sodium sesquicarbonate is the most widely seen soda mineral in nature. Kahraman kazan trona reserve is 1,650,000,000 tons.

WHAT IS SODA ASH?

Soda ash that is also named as sodium carbonate is ranked tenth among the most widely used chemicals in the world. It is used as a raw material in glass, detergent and cleaning materials, and as an additive in chemicals and metallurgic applications.

While soda ash that is named as the tenth most traded chemical of the world with a total global trade volume of 15 billion dollars is the second most important raw material in glass industry after sand but the most strategic one, it is used as the main raw material in detergent and soap industry. The soda ash that has a wide area of use in food and pharmacology industries, paper industry, flue gas treatment systems, water conditioning and water treatment systems is also widely used in chemicals industry.

Ciner Group that grows grapes on 30 decare land of Eti Soda provides technical and academic support to regional viticulture. And Kazan Soda will support apiculture in this region by increasing the number of trees that it planted to 1 million from 100 thousand.

Usta, the CEO of Ciner Group: Compared with other countries, Turkey is more attractive in terms of investment

Mr. Gürsel Usta, the CEO of Ciner Group said that “Turkey ismore attractive in terms of investment when com...

WE Soda sells 60% of its US soda ash business